His Purposes are Great and His Ways Unexpected 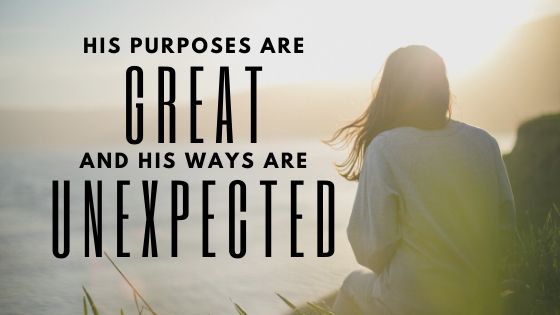 During high school, I was in the medical academy. I thought that it was the field that I wanted to go into as a career and that I was going to be a nurse. During my senior year I took 2 classes that had to do with the medical field: EKG Technician and Home Health Aid/Phlebotomy. I enjoyed being in those classes and learning more about the medical field. Originally, after I graduated in 2018, I thought that I was going to go straight into the Army and thought that I would like to do that. But I was taking a prescription for migraines and they said that I would have to be off the medication for a year before I could join. So, after they told me that, I went to my second option which was college.

I really didn’t want to go to Polk State College because that is where everyone I graduated with went, so I decided to apply to Southeastern University. I didn’t think that I would get in because my SAT and ACT scores weren’t that good and I didn’t know how I would be able to pay for it. I just knew that, if God wanted me to be there, He would provide the funds needed. I applied and got in, but I still had to figure out the funds. I talked to my admission counselor at Southeastern and they ended up giving me multiple scholarships, but I still had to take out some loans and pay a monthly fee. A week before move-in day I was still trying to figure out the funds when my admission counselor called me and said that they would give me some more scholarships after I wrote an essay to the admission board saying why I needed more funds and why I wanted to be at Southeastern. I got the extra funds and was able to move in that Friday!

I first majored in nursing and I was also in the Army ROTC program to see if serving in the Army was still something I would like to do. Every morning, 5 days a week, we had physical training at 5:45 in the morning. We would do workouts including everything from HIIT workouts, running, push-ups, sit-ups, stretching, and more. There were so many mornings that I just wanted to give up on the workouts that we were doing. About two-thirds of the way through the year, I ended up spraining both of my ankles from the running and had to do modified workouts in the gym. After they were mostly healed, I got back out there running and was determined to pass my physical training test. I could do almost 60 sit-ups & 10-20 push-ups before going to my knees for modified versions, but I was still struggling on making time on my running and making weight. But I had help from others in the program, as well as some of the cadre (Sergeants, Master Sergeants, Captains, etc.) to help me reach my goal. I ended up staying in the program for the whole year and didn’t give up, by the grace of God. It was hard and there were so many times that I wanted to quit but I persisted.

As the year went on, I wasn’t sure that God wanted me to continue as a nursing major, so I asked Him what He would have me do instead. I wasn’t very good at math and science and I felt like that was something I should be good at in order to be a nurse. I felt that He was calling me toward counseling others and to grow that skill so, after researching different majors, I decided on Psychology.

In March, we had a mission focus weekend at my church. Two of the missionaries that came were Lincoln and Jamie, the National Directors of Children’s Bible Ministries.  During that weekend, there was a night the missionaries went to church members’ houses for dinner and to talk about the ministry., Lincoln and Jamie ended up coming to my grandparents’ house for dinner and they shared about the CBM Internship Program. As they were talking about it, I asked them some questions about it and told them that I would think and pray about applying.  I thought that it was something I’d like to do. After a couple of days or weeks in prayer asking God for guidance, I decided to apply for the internship. About a month later, I found out that I was accepted, and I was super excited! I knew that this was the direction that God was leading me towards, and He had a purpose for me getting accepted into the internship.

So far since I’ve come to the internship, I have learned so much about what it means to be a missionary, created habits in reading and studying the Bible, Bible memorization, and how important it is to spend more time with God in prayer. Since I’ve been here, we’ve been taking different types of classes such as; Personal Fundraising, Evangelism, New and Old Testament Survey, Leadership, etc. From Personal Fundraising, I have learned that sometimes it’s okay to ask others for help. We shouldn’t think about it as a scary thing, it’s asking someone to be a part of your team and to support you throughout your time as a missionary. In two of my classes we have learned how to tell our testimonies and why it is important. And as we continue to have opportunities to give our testimony to many people that may or may not be believers, it is important because something we say can impact another person. I have also continued to seek guidance on counseling others from Jacquelyn, the Intern Coordinator. We went though scenarios on how I could counsel others and she also let me borrow these booklets that were on different topics that can help me understand how to counsel others using Scripture.

I can already begin to see how He is going to work in my life and continue to grow me to be more like Him. And I can’t wait to see where He leads me next, whether it’s becoming a full time CBM missionary, go back to school at Southeastern, or something else.

Verse I like to keep in mind: 2 Corinthians 5:7 “For we walk by faith, not by sight.” Everything that got me here to the internship were just many steps of faith to get to where I truly believe that this is God’s path for me.

To learn more about the internship program visit our website: www.childrensbibleministries.net/internships

No Replies to "His Purposes are Great and His Ways Unexpected"