It’s amazing to think about how God brought me to this place. A year ago I was pursuing working in a church in a different state; camp ministry wasn’t even close to being on my radar. God used one phone call to change my whole life. Not only has He given me a new direction, but He has also given me a clear calling and vision for what He is asking me to do —  horse ministry. I am not a visionary. I have always been the one who looks at someone else’s big picture and sees all of the little details that have to happen to make that vision a reality; so, when God gave me the big picture for what an effective self-sustaining horse ministry would look like in a camp setting, I knew it was a big deal. My dream is to be able to use horses as the ultimate object lesson. 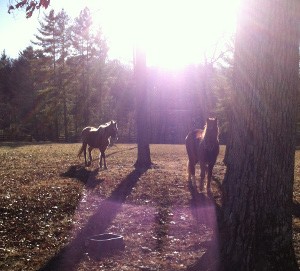 What does that mean for me as a CBM Intern? It means that what I’m learning is geared toward horse programs. While I was at CBM’s Headquarters for the first four months of my internship,  I worked on a business project: figuring out the logistics of a week of horse camp. Then, during my first camp rotation at CBM’s newest camp, Camp Ozone in TN, I worked with a horse that will one day be used for the ministry, wrote Bible study lessons that use horses as practical examples, and created a schedule for three horse camps based on rider experience level.

Right now, for the second camp rotation of my internship, I’m at Ponderosa Student Ministries in Mentone, AL, for four days a week. While I’m not working with the horses very much, I get to have great conversations with the couple who cares for the horses. Usually this looks like me asking a hundred questions about why they do what they do. The cool thing is that I can refer back to these dialogues when I start building my own program. I spend the rest of my time back at Camp Ozone working with my fuzzy faced friends. If you’re wondering if I wish I was at just one camp 7 days a week, instead of splitting it up, that’s an easy question. No, I don’t. My continued experience with my horse at Ozone has not only taught me more about owning a horse and managing a barn, but that horse has shown me more about who God is and who I am in relation to Him.

My horse’s name is Glorfindel but most people know him as Glory. In case you were wondering, he is named after one of the very cool elves that didn’t make it into the movie, The Lord of the Rings. Glory is a 5 year old chestnut gelding. I love his color and his crazy long mane, I love his cute little ears and his fuzzy nose, but mostly I love how as he learns to trust me, I learn to trust God more.

In scripture, mankind is often referred to as sheep. Do you know why? Sheep were a very common animal in Palestine and everyone knew that they tended to make unwise choices. Horses have that same struggle. The difference is that a horse can weigh over 1000 pounds and can cause a lot of trouble. Don’t get me wrong, I love horses and know that they are incredibly intelligent animals, but they lack perspective. They don’t think through the ramifications of something like, “If I knock over the water bucket 10 minutes after she leaves for the day, I won’t have any water all night.” It’s all about right now for them. Sound familiar?

One of the biggest lessons that Glory and I learned together was trust. Glory is afraid of a lot of things and one of them used to be his water trough. We had to work through that fear so that he would drink. I had to help Glory understand that the trough wasn’t going to eat him if he stuck his head inside it. I knew that if he trusted me and overcame his fear of the trough, something good would come of it: he would get to drink water, but to him it was scary and dangerous. He didn’t know anything about that water trough. He’d never seen anything like it and it could very well be a dangerous monster in disguise. But I had a better perspective than he did. I knew that water trough was a good thing so I kept asking him to drink. After a while, he realized that it was safe and started to drink on his own. 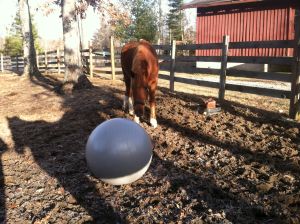 There have been many other things that we have had to work through. Glory was afraid of the dark creepy stall, the big silver ball that bounces and makes terrible noises, and the big scary tractor, but together we were able to face and overcome all of those fears. The more he learned that I was trustworthy, the more willing he was to face something scary when I asked him to, and not only that, but he also faces more of his fears on his own when I’m watching. He knows that I won’t let something hurt him.

God is the same way. The more He asks me to step out of my safe little world and do something scary, the more I trust Him. Sometimes I take a lot of convincing, but the more I trust Him, the faster I do whatever crazy thing He asks me to do. One of the hardest was when He asked me to leave my job, home, and church to pursue this crazy dream I have of doing horse ministry. In those situations I have to remember that God can see something I can’t see. He has a better perspective than I do. He can see all of the incredible things that He has in mind for my good, according to His will. One of my favorite verses recently has been Psalm 16:8 which says, “I have set the LORD always before me. Because He is at my right hand, I will not be shaken.” When I put my focus on Him and walk with Him in willing obedience, despite my reservations, God gives me strength and courage to do whatever it is that He is asking me to do.
Just like Glory doesn’t see that the yoga ball is something I got for him to play with and that it’s not going to eat him, I can’t always see God’s plan. But I do know that God is trustworthy. I know that because He has been trustworthy over and over again in my life. Romans 8:28 says this, “We know that all things work together for the good of those who love God: those who are called according to His purpose” (HCSB). God has a perspective that I don’t have, and His plan is perfect and it is good. Glory is learning the same thing about me. He trusts me much more now that we have faced so many fears together. He knows now that I won’t ask him to do anything that will hurt him, just like I know that God will not ask me to do something that He won’t give me His power to do. I only hope that I can strive to be as faithful and trustworthy to Glory as the Lord is to me.