We are God’s Workmanship: An Intern Mission Trip Update 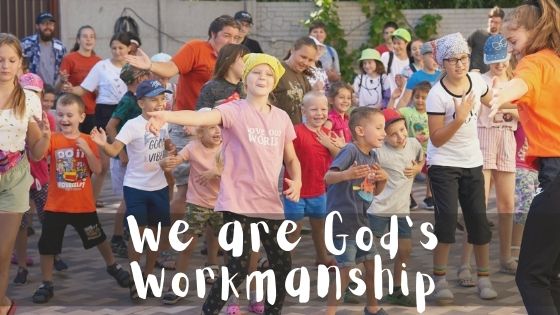 I haven’t done many things but I can mark off going on a mission trip overseas. For the mission trip this year we went to Ukraine. We went to two places there: Desna, a large military base out in the country of around 10,000 soldiers and Bilogordka a small town outside of Kyiv the capital of Ukraine. We were going to help run the camps that the Churches there were running. My task was to prepare a lesson to teach the teens.

In Desna, we did a lot of stuff with the kids like sing silly songs, play games, and do a craft. Then we’d hang out with the teens in the evening. Pastor Igor’s testimony shows the awesome power of God to change lives. Igor grew up in Desna and got into drugs and stealing. He was arrested and then he realized that he was either going to end up dead or in prison. He gave his life to Christ and now is the pastor of the church in Desna and also on the city council! On top of that, some of the people he committed crimes with go to the church in Desna.

On Saturday, a few of us played in a basketball tournament. We had no details about this event other than the sport that we were playing. When we got there, we quickly realized that this was a real tournament and we they were skilled. We played and to our credit we didn’t get shut out and got fourth place out of five teams. On Sunday, we walked around Kyiv and looked at the old orthodox churches and did some shopping at some street vendors. We ate lunch at possibly the best McDonalds in the world and that’s something because I don’t like fast food.

The next place we went was a small town outside of Kyiv named Bilogordka. The church service in Bilogordka was amazing. There was more worship music than what we do here at home but it was spaced out in the service. There was also a time when Johnathan and I gave our testimonies and Stephen Holmes preached. The camp there was similar to the one in Desna except for one small detail: the young people ran the camp! We played a pick-up game of soccer and I haven’t played in a while so it was nice to play with them.

One thing that gets emphasized a lot in the internship is flexibility and we got our flexibility muscles stretched. Many things that we had planned for were changed. The first thing that happened even before we left for the trip was that two of our team member’s passports didn’t come in time and they could not go. The children spoke mostly Russian which affected our Bible verse lessons and a few songs we had prepared in Ukrainian. Also, because the children in both areas were unfamiliar with the Gospel, we mainly focused on teaching that which changed some the lessons we had prepared. In spite of whatever hiccup we had, we adapted and most importantly we were there to serve God and help the Ukrainians.

I enjoyed my short time in Ukraine and I hope I can go back there for longer.

I’m so grateful for the opportunity to go to the Ukraine and lead the games with the local believers. It’s an experience that I’ll never forget. My favorite memory was communicating with the locals. Even though we didn’t understand each other’s language we still were able to communicate by hand signals. It just shows that when there’s a will there’s a way. When things got lost in communication it added a twist to the game that usually made it more enjoyable. Even if the game doesn’t go as planned seeing the joy on the children/teenager’s faces made me remember the bigger picture.

This trip was absolutely amazing! God worked in so many ways from getting us there, keeping us healthy and being with us as we were far away from family. We planned and went into the week thinking we knew what we were doing but we did not know at all that would happen, which brings in our favorite word here in the internship: FLEXIBILITY. We had to change things to meet the needs of the church/people we were serving but it all went great. I loved that all the people there in the Ukraine were so nice to us. We got to teach them some cool handshakes and how to speak a bit of English and they showed us some amazing food and how to speak Ukraine and Russian. I loved it! All in all, it was an amazing experience that God allowed me to have and I thank Him for everything.

I started my day off with prayer that I wouldn’t get sick on the flight. There was so much prayer put into this trip I can’t even explain! The weeks before we left, we saw the spiritual war going on. Passports coming late, team members coming from all over and worried we might have been exposed to sickness (None of us were!). There were feelings of anxiety, depression, and being unprepared, or confused on what to do. Our team never left the spiritual war!  We prayed daily together and for each other on our own. Getting to the Ukraine it was absolutely amazing. I saw God’s work in everything. Every small little detail from not getting sick on the plane, to making it off the plane to the bathroom to puke (I get motion sickness every time I fly), to liking food I’ve never like before, not having energy to get up and play with the kids, not being able to talk but still communicate! We didn’t bring God with us; He was already there! He was preparing all of us, from both teams. It was so incredible to see the people there work with such passion and joy!

Being able to go to the Ukraine for my first overseas mission trip was such an answer to prayer. I have always been hesitant to go overseas for a mission trip because I do not like to fly. However, during the flights, I used the time to pray and seek the Lord for comfort and peace. The Lord gave me a peace of mind, that could only have come from Him. When we got there, we were welcomed by our brother and sisters in Christ. They were willing to open up their homes, serve us any way possible, and show us the love of Christ. I had the unique opportunity to teach the fruit of the spirit to the children at the two camps where we were able to serve. It was interesting to teach children that have a different language then myself, but the Lord still worked through the language and culture barrier. I was able to hear the testimony of one of the pastors and to hear how God was able to change his life. Family has always been huge to me and going on this mission trip and meeting everyone in the Ukraine, helped me to see that I have Christian family even in another country.

No Replies to "We are God’s Workmanship: An Intern Mission Trip Update"