“How the internship helped me become a better communicator” 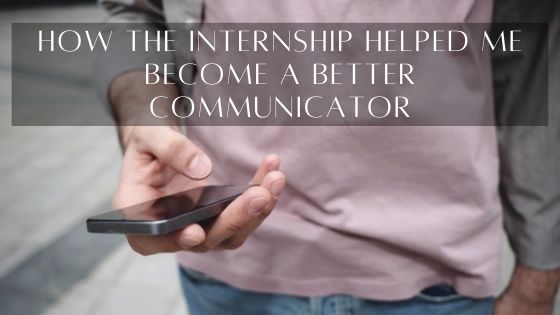 I’ve been in this internship for eight months. When I first arrived in September, I thought I was great at communicating. Turns out, this was not necessarily the case. I realized I was only good at the frequent interruption and giving unsolicited advice, which gave me a know-it-all expression. This led to me hoarding the conversation most of the time. I didn’t want to open my eyes to my unchecked conversation habits.

I began working toward a better relationship with God through doing my devotions combined with my leaders and peers who helped me understand that I needed to grow. They walked me through the problems that came up, talked to me privately, and didn’t make me feel bad when I was rude. It was hard for me to hear that I was being selfish for so long that I didn’t feel like changing. Truthfully, does anyone necessarily like change? Maybe not, but change is vital for growth. I began to understand that people aren’t going to want to talk with me or listen to me if I only cared about what I say. That thought impacted me in a huge way.

I’ve always wanted to be a leader. I wanted people to know I was the leader just by looking at me. That has been one of my drives ever since I was young. During the training portion of the Internship, there was a leadership class that I was able to be a part of. I was so eager to learn. One of the biggest things I took away is that a leader is someone who asks themselves how they can add value to their team. They put their teammates first before themselves. This made me think of,

A leader is someone who isn’t selfish; they are intentional about other people, making sure everyone’s voice is heard. In leadership, it’s better to give more opportunities, to other people, because there is safety in not speaking. This is more for the people who talk about something they don’t know about, which is something I struggled with at times. Speaking for someone who wants to act like they knew everything, that is when I learned about what meekness is. It’s an amazing feeling to lead a group, but it’s a greater feeling to allow someone the opportunity to lead a project. There’s no point to speak on something if there is someone who can do a better job.

From that evening on, I would start my day by asking myself that question. It was great being able to see the change in the way I interacted with the other interns. Asking myself that question was just a seed that God used to work on my selfishness. I started to understand that communication isn’t just about talking, it’s about listening too. However, listening isn’t the same as waiting for your turn to speak. You can’t be a good communicator if you’re not a good listener. I learned that I needed to slow down and pay attention. It sounds easy to do, but I’m a very distracted person when I’m talking with someone. I do my best to have self-control. My mind tends to wander on what I’m going to say instead of putting my full attention on what the speaker is saying. This isn’t right because it’s selling the lie that I’m listening to them. Now, when someone is talking with me, I’m able to give them my full attention. By doing that, I don’t miss as much information as I was before. I always knew I was bad at remembering details, but I didn’t know why. Now, I am able to hold on to information a lot better because I actively listen.

Something that I overlooked was the tone that I would use. I would say something true but since I didn’t say it in the right tone, it perceived that I have a stuck-up attitude. Someone showed me,

Ephesians 4:15 states,” Rather, speaking the truth in love, we are to grow up in every way into him who is the head, into Christ,”

Same as before when I heard that I needed to change because it was hurting my relationships with everyone whom I was talking with. This affects my testimony but more importantly, it brings down God’s name since Christians are the ambassador.

In 2 Corinthians 5:20, it says, Therefore, we are ambassadors for Christ, God making his appeal through us. We implore you, on behalf of Christ, to be reconciled to God.” (English Standard Version)

Having an understanding of it being God’s law brings me to understand that I need a commitment to make sure what I say and how I say things reflect who and what God is. This is convicting because I can remember so many things that would ruin God’s name, but He is faithful to forgive anyone who sincerely asked forgiveness. I am so glad; we have a God that loves us even though we are imperfect. I can remember times that I would speak before thinking and end up saying something that I would regret, this especially happened when I let my emotions carry me away. Emotions are a big part of communicating, I never really sat down to think how it can affect the people around me, but once I did, I became more aware.

To sum everything up, The Internship has opened my eyes to my habits that were negatively impacting my relationships but most importantly it was having a damaging effect on my testimony. I was humbled. I had to remind myself that Jesus never said that the Christian life would be easy. He does promise that he will always be with us, and that has helped me go through this journey to be more Christ-like.