FROM THE VAULT: Honoring Fathers 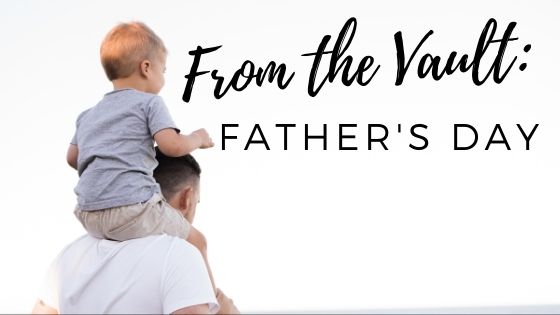 [From the Editor] The Catholic Church has recognized the important role of fathers since at least the early 1500s, in conjunction with a feast day honoring Saint Joseph (Mary’s husband and Jesus’ earthly father.) However, Father’s Day as we know it is a relatively new holiday. Much like Mother’s Day, Father’s Day celebrations by local congregations or communities started popping up in different areas of the United States in the early 1900s, whether as a one-time or an annual event. While the first bill to recognize it as a federal holiday was introduced to Congress in the 1910s (around the same time as Mother’s Day), it was feared that it would become too commercialized. Over the next decades there would be days recommended to be set aside to honor fathers, but it wasn’t until 1972 that President Richard Nixon would finally sign it into law as a permanent national holiday on the third Sunday in June. While the date varies by country, the importance of fathers in their children’s lives is now celebrated in over 100 countries around the world. One of our current interns and a staff member’s excerpt “from the vault” show why fathers are such an important part of God’s plan.

[by CBM Intern Gracie Kinsey] Father’s Day at CBM is a very special holiday because it recognizes the contribution that fathers make to the lives of their children. Fathers play one of, if not the most crucial earthly role in the lives of their wife and children. Paul writes in Ephesians, “Fathers…bring [your children] up in the training and instruction of the Lord.” (Ephesians 6:4) The father figure is meant to model the behavior and actions of Jesus to his family. “As a father has compassion on his children; so the Lord has compassion on those who fear Him.” (Psalm 103:13) In fact, children often learn the most about the character of God from the obedient love of their fathers. One of the greatest qualities that God has to share with us is that He is always with us. He never leaves.

[Scott Brinson is the area director of CBM of the Great Southwest and his testimony of his Father’s presence in his life is most touching. Originally posted in Scott Brinson’s newsletter dated June 2002.]  This Father’s Day I spent the afternoon in the VA center where my dad now lives.  He can no longer communicate or care for himself without assistance.  As I helped him put on his shoes and eat his dinner I thought of days gone by, of hot summer afternoons sitting next to my dad on his tractor, of warm evenings at the little league field hearing that familiar yell, “Get a hit, Scit!” (my nickname).  My dad had a profound impact on my life, not because of his presents, but his presence. I still have many of Dad’s letters, letters filled with practical wisdom, encouraging words, and loving warmth. In reflecting upon the friends of my youth, one person stood head and shoulders above the rest.  It wasn’t Mel, Dale, Billy, Luis, or any of my neighborhood pals, but the man I affectionately called “Daddy.”  On my wedding day, my father and friend stood by my side as Best Man. I can’t think of a more fitting title.

Be sure to tell your father figure (dad, step-dad, uncle, etc.) how much he’s meant to you over the years and thank God for the godly influence He’s put in your life. Think about someone in whose life God is calling you to have an impact–maybe your own children or maybe a child who doesn’t have a godly example of what a father is–and reach out to them as the Heavenly Father leads you.

“Honor your father and mother. Then you will live a long, full life in the land the Lord your God is giving you.” Exodus 20:12

“My father taught me, ‘Take my words to heart. Follow my commands and you will live.’” Proverbs 4:4

No Replies to "FROM THE VAULT: Honoring Fathers"