Support-Based Missions: Is there validity and a biblical basis? 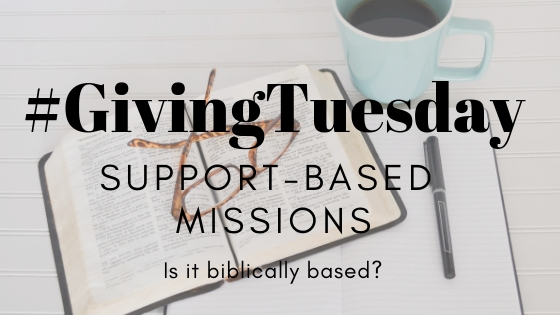 If you follow Social Media, you might have noticed that November 27th is known as #GivingTuesday. Around here, being a mission organization that trains, equips and sends out missionaries, you can imagine how often the topic of giving or support comes up. Since Giving Tuesday is upon us, I decided it was about time to write this blog post answering the question, “What exactly is support-based missions and why is it important?” Support-based missions is when an individual or family is financially supported by individuals or churches, in order for them to go and do mission work.

We see support-based missions represented in the gospels when Jesus sends out the 12 disciples and then the 72 in Luke 9 and 10. He specifically tells them not to take ANYTHING with them, but they are to GO and spread the gospel. We see that they stay in someone else’s home, that welcomes them. This is not the first time we see, in Scripture, the basis for opening up our home to missionaries. We see this also in the book of Kings, when the Shunammite woman opens her home to the prophet Elisha. What a beautiful story this is, found in 2 Kings 4, where this Shunammite woman recognizes that Elisha is a man of God, doing God’s work as he has been called and, therefore, she makes a room for him and feeds him whenever he passes through. Hudson Taylor once said, “Depend on it. God’s work, done in God’s way, will never lack God’s supply.” My friends, our God is so faithful to provide, not only does He choose His people to go and serve but He also chooses His people to send and support. What a beautiful thing to watch the Bride of Christ at her Father’s work.

The most famous example of a support-based missionary, however, is Paul. Paul, along with a man named Barnabas, was sent from the church at Antioch (Acts 13:1-3). Later, in Chapter 15, we see Paul meeting with the Church of Jerusalem, where they were sent with a letter to the Gentile churches. We have often heard of the travels of Paul across the region, as he brought the good news of Jesus Christ to those in the Asia Minor. In Acts 18 we find Paul in Corinth where he met some fellow tent-makers (what Paul did before coming to know Christ). We see that he stayed with Priscilla and Aquila, working with them, until Silas and Timothy came from Macedonia. At which point Luke tells us, in verse 5 that, “Paul devoted himself exclusively to preaching and testifying to the Jews that Jesus was the Christ.” How was Paul able to devote himself to this work of preaching the gospel? Support-based missions. In 2 Corinthians 11:7-9 Paul speaks to the church of Corinth and says, “…did I commit a sin by humbling myself so that you might be exalted, because I preached the gospel of God to you free of charge? 8 I robbed other churches by taking pay from them to minister to you. 9 When I was present with you and in need, I did not burden anyone, for the brothers who came from Macedonia supplied my needs. I have kept myself, and will keep myself, from burdening you in any way.” Remember the two men who came from Macedonia? They brought the gift from the church of Macedonia for the work of the Lord being done in Corinth! Remember they didn’t have online giving back then. They had to send it via messenger, and I don’t mean Facebook. Paul also tells us, at the end of the book of Philippians, how the church at Phillipi supported him financially. Paul was a support-based missionary.

Support-based missions is biblically-based, but that doesn’t make it any easier. In our human mindset, it seems better to not ask anyone for anything, pull ourselves up by our boot straps and “make it happen” as it were. However, I do believe there are a number of reasons that support-based missions is good and designed by God with a specific purpose.

1. God often uses the support-raising process to confirm our calling. I want to be careful here and remind my readers that God’s timing is not our timing. Just because fund don’t come in at the pace and timing that YOU have set, doesn’t mean that God hasn’t called. There were several times in my life that I was positive that God was calling me to ministry, and I was ready, but it was not yet time. God gently steered me throughout those years. However, I will say as, Hudson Taylor said, that if God calls you, He will provide! I have never once wanted for anything and I have been in and out of full-time ministry since I graduated high school. I don’t know how to fully explain that moment when you see the provision of God so clearly you, once again, just know that He has called you to something you can’t do on your own. Until you experience it first hand, it is hard to grasp. I often think of Abraham and Isaac when God called Abraham to sacrifice his son. Abraham didn’t know it, but God already had the ram, or the provision, ready. I am sure that, during the trek to the mountain, while they were setting up the altar, and while Abraham was tying up his son, he was wondering, “Ok Lord, where is the provision?” Then the moment came and Abraham saw the ram caught in the thicket. In that moment, once again, the promise was confirmed. Abraham knew who his God was and that He would not leave him.

2.  Support-raising causes us to ask, “Am I 100% in?” This may seem like a weird question, at first, but it is important. Missions sounds so glamorous and exciting at times. Christians can often get caught up in the excitement, and I believe they should, but we also have to realize what is asked of us. We are called to go and we are called to sacrifice. When someone is called by God to leave behind whatever they did before and pursue others with the gospel of Christ, they have to relinquish their old way of life and their own means of survival. When you are a support-based missionary you no longer are in control of how much you make and what your monthly paycheck will look like. This is a very scary thing, but if you know to what you have been called, you can be 100% in, because you know who your God is. When you come face to face with God Almighty and He commissions you to ministry, like Isaiah in Isaiah 6, it doesn’t matter the cost, because God himself enraptures you. Bottom line, when you have to step into a ministry position that is support-based, you ask yourself, “Am I willing to go the distance? Am I in 100%?”

3.  Support-raising causes us to be completely dependent upon the Lord. If you talk to any missionary who has had to raise support, they will tell you story after story of God’s provision and how they have to completely rely on the Lord for everything they need. But, even more than that, when you step into support-raising, it causes all your pride to come to the surface and face the Lord. Let me tell you, that is not the most comfortable thing, but it is necessary. You cannot be in missions with the mindset that you are doing the heavy lifting. In fact, the moment you begin to think that you’ve got this, God, in His grace, brings us to a point of, once again, realizing who we are and who He is. The truth is, it is a huge privilege to be used of God as a vessel for showcasing His glory and bringing the truth of what His Son did, on the cross, to the world. He doesn’t need us but, in His sovereignty, He chose to use us. What a humbling thought. And I am constantly reminded of this because everything I have comes from Him.

4. Support-raising calls us to be good stewards. When everything you have is because of the faithful provision of God, it causes you to take account of how you use His money. I have found that it has taught me to be more generous because I recognize how generous He is with me. I desire to take good care of things because He blessed me with it. It causes me to think about what I can live without. It makes me ponder how many things I have to thank God for.

In conclusion, support-based missions was designed by God. It seems strange, but also amazing, that the God of the universe has thought through every single little detail about how He desires to spread the gospel across the world. Maybe you have been on the fence, afraid to step out in faith and be a support-based missionary. I want to tell you that our God ALWAYS provides! Take that step of faith and taste and see that the Lord is good. Maybe God has called you to support. Will you pray about supporting a missionary today? Click the Donate Button and help CBM send out new missionaries.

No Replies to "Support-Based Missions: Is there validity and a biblical basis?"