FROM THE VAULT: The Importance of Mothers 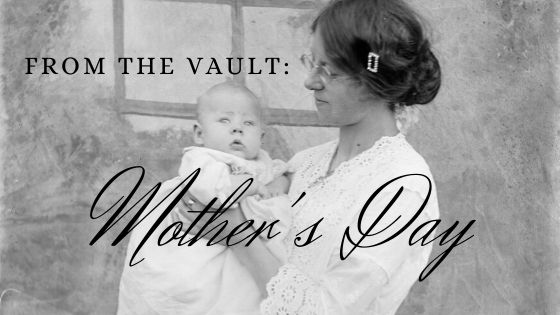 [From the editor] If you do a quick search on the internet for the history of Mother’s Day, you will be told that mothers were celebrated as far back in history as the Greek and Roman times. A tradition started in 16th century England, known as Mothering Sunday, when Christians would return to their “Mother Church,” has slowly changed into a day to celebrate mothers. It is commonly celebrated 3 weeks before Easter in the United Kingdom and former British colonies (Canada, Australia, etc.). Most modern Mother’s Day celebrations, however, have their root in America. Several women in the late 1800s called for a day for mothers to be recognized and some local celebrations were held annually, but it wasn’t until the early 20th century when a woman from West Virginia named Anna Jarvis started campaigning for a holiday that Mother’s Day celebrations became common. In 1914, President Woodrow Wilson officially made the 2nd Sunday in May a national holiday to honor moms. Today a similar holiday is celebrated in at least 40 countries around the world. However, the tradition of honoring mothers goes back even before the Greeks and Romans, as illustrated both by one of our current CBM Interns and an excerpt “From the Vault” by a CBM Staff member, who cite both Old and New Testament passages honoring mothers.

[by CBM Intern Gracie Kinsey] Mother’s Day is a day we honor the family member who is the glue that keeps us all together. The wise, compassionate, and strong warrior who never fails to put her family before herself. Our beloved mothers are so much more than the “stay-at-home cook, cleaner and laundry-doer” that they are often stereotyped to be. No, their role is so much more than one could ever see. Her worth is “far more than rubies,” King Solomon writes in Prov. 31:10. It is commanded by the Lord that she be honored by her children and husband. She is a teacher and instructor to the young. A giver of life to her children. Cunning, hard-working, diligent, beautiful, fearless, respected, dignified, and faithful. The title of  “a good and godly wife” is not earned when a child is born, it is the result of obedience and humble acceptance of this high calling from her Heavenly Father.

[Originally posted in Scott Brinson’s newsletter dated May 2002] Timothy learned the ABC’s of genuine Christianity, not from his Greek father, but from his godly Jewish mother, Eunice, and grandmother, Lois (2 Tim. 1:5).  Through his maternal lineage Timothy had the blessed privilege of seeing authentic spirituality in action. As John Calvin notes, Timothy “was reared in his infancy in such a way that he could suck in godliness along with his mother’s milk.”  As we honor our mothers this month, let us once again affirm and esteem the high calling of motherhood, recognizing that it is through a mother’s wisdom and understanding and knowledge and selfless devotion that a home is built and established and filled with precious and pleasant riches (Prov. 24:3-4).  Thank you, moms, for your faithful work and loving labor (I Thess. 1:3).  Your worth truly is far above jewels!

Take time this week to do something (write a letter, make a phone call) to thank and recognized someone who has been a mother figure in your life (biological mom, adopted mom, mother-in-law, spiritual mother) and thank God for their influence in Your life!

“Her children arise and call her blessed; her husband also, and he praises her: ‘Many women do noble things, but you surpass them all.’ Charm is deceptive, and beauty is fleeting; but a woman who fears the LORD is to be praised.” Proverbs 31:28-30.

No Replies to "FROM THE VAULT: The Importance of Mothers"